„I gained my first experience with this ball stretcher. It is well made and with ...“
–Henry

A labia spreader also known as vagina spreader, pussy spreader or also as labia spreader, has several functions. On the one hand, it should stimulate the woman's G-spot if possible and irritate it with its shape and movements. He also provides deep insights.

A labia spreader also known as vagina spreader, pussy spreader or also as labia spreader, has several functions. On the one hand, it should stimulate the woman's G-spot if possible and irritate it with its shape and movements. He also provides deep insights.

Close filter
No results were found for the filtering!
Intimate Spreader strong
Black labia spreader that stimulates the G-spot due to its shape. Made out of flexible wires with a grooved silicone cover. The clips can be individually adjusted using the adjusting screws. Black/purple. Material: metal, silicone.
€29.95
G-spot Labia Spreader
Finds the G-spot and spreads the labia! Purple labia spreader. Total length ca. 28 cm, Ø 0.5-1 cm. Material: metal (inside), silicone (outside), free of phthalates according to EU regulation REACH.
€29.95
Labia spreader with vibration
Labia spreader with vibration and remote control This labia spreader will thrill you. Insert the vibrating end deep into the vagina and use the bendable labia spreaders to present your labia invitingly open. The vibrating egg of the...
€69.95
Firmly seated bridle for her and him
This noble and attractive bridle is perfect for HER and HIM. The necklace is variable in its length thanks to a carabiner clasp and can therefore be optimally adjusted to the wearer. The central element of the bridle is the stable bridle...
€29.95
Pearl String with Silicone Clamps
Black spreader panties with clips for the labia and beads for stimulating the clitoris. Total length 68 cm long (stretchable and adjustable), length of each clamp 6 cm. Material: ABC, silicone, polyamide (phthalate-free according to EU...
€34.95
Intimate Heart-shaped Chain
Silver-coloured chain with labia clips and a heart-shaped pendant (1.5 cm) with decorative rhinestones. Complete length 12.7 cm (including clips, chain and pendant). Material: iron, alloy, glass.
€24.95
Bad Kitty Spreader String with Vibrator
It's like putting on a G-string: the labia spreader with vibration! The clamps are attached to the labia to spread them and expose the clitoris. With the screws the intensity of the clamps can be varied from soft to hard... The string...
€39.95

How does a labia spreader work?

On the one hand, this exposes the head of the clitoris, so that it can be stimulated better and more intensively. On the other hand, many women enjoy the feeling that the vagina is spread wide open and thus feel touch more intense.

How do I use a labia spreader? 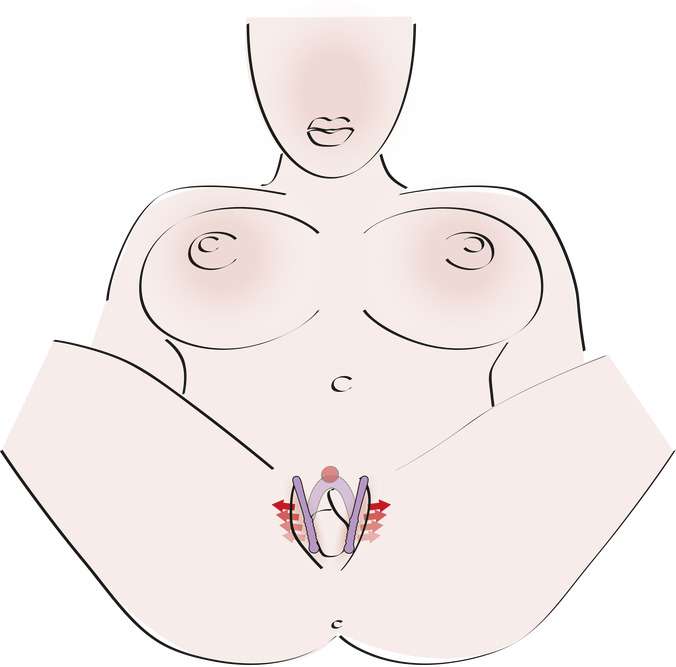 Some models can also be worn during sex without any problems and make the experience even more intense for both the woman and the man. This is mainly due to the many rings and the design of the spreader arms, which provide continuous stimulation.

Tip: With a little lubricant, the insertion works even better.

How to insert a labia spreader?

Labia spreaders are available in various designs and shapes with silicone coating. The sex toys should best be made slippery with lubricant gel. The body of the labia spreader is now inserted into the vagina. Depending on the body type and arousal, this often goes very easily and without much effort.

The arms should be turned so that they push the labia away to the outside and thus fulfill their actual purpose. Some labia spreaders have clamps which can be attached to the labia.

Labia spreaders are enormously popular with both men and women.

This is not only due to the easy and comfortable use of these sex toys, but especially due to the wonderful sight, which can be achieved by the labia spreaders.

The wide spread labia allow a direct view of the inner and small labia, make the clitoris easily accessible and open the lady comprehensively for the most diverse stimulations.

Thanks to the large selection of different labia spreaders, you can experience your partner as open as never before or even include the labia spreaders in the stimulation. After use, they can be cleaned with a toy cleaner or water.

* All prices incl. VAT plus shipping costs and possibly cash on delivery charges, if not described otherwise